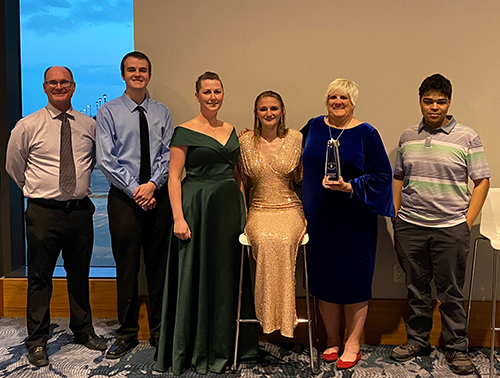 For the first time in three years, Redlands Community College students returned to Catalyst, the international conference for Phi Theta Kappa, the international honor society for two-year colleges. The students from Redlands’ Alpha Beta Upsilon chapter of Phi Theta Kappa made the most of the opportunity, competing in various events and celebrating their achievements during the awards ceremony.

“After being virtual for two years, the energy of over 3,000 students was invigorating, and has motivated the Redlands team to compete more fiercely next year to build on our ongoing success,” said Dr. Julie Flegal-Smallwood, Redlands instructor and PTK faculty advisor.

Chapter president Alison Tock, of Watonga, achieved Distinguished Chapter Officer at the regional level, and was also one of 30 officers selected internationally. Each year Redlands collaborates with other chapters as part of the OK/AR Region, and the efforts of this region garnered the students two Awards of Excellence in Scholarship and Transfer Readiness.

During the conference, Redlands students also competed in e-Sports and the Scholar Bowl. Jarvis Long, of Moore, competed with two students from other chapters in the inaugural e-Sports tournament, winning 15 consecutive matches before being eliminated in the semifinal round. Daniel Starks, Redlands’ Academic Team captain from El Reno, led the Division 3 team in the Scholar Bowl, taking first place and earning a $100 scholarship.

“Catalyst was exciting! The energy from everyone in attendance was contagious, and the entire crowd was in an uproar celebrating the accomplishments of everyone around them,” Tock said. “The level of camaraderie between competing members was inspirational and beautiful to witness.”

“Phi Theta Kappa is an outstanding organization, and I am proud of our Redlands students who have chosen to make the most of this opportunity,” Bryant said. “The four hallmarks of Phi Theta Kappa are scholarship, leadership, fellowship and service, and throughout the pandemic, the students have continued to exemplify these characteristics. I am confident that the relationships they have developed and skills they have enhanced because of their Phi Theta Kappa experience will serve them well.”