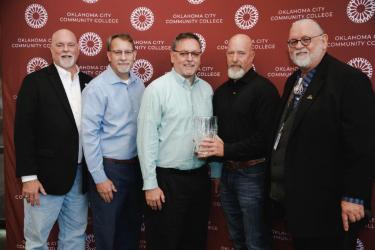 For more than four decades, Dr. Bill Cole was a valued member of the Oklahoma higher education system, and due to his dedication to students, faculty and staff, he was inducted posthumously into the 2022 Oklahoma Association of Community College Hall of Fame.

“Dr. Cole was a kind, caring and inspiring leader who was committed to helping so many people achieve their educational goals. He left an incredible legacy, not only here at Redlands, but throughout the state,” said Jack Bryant, president of Redlands Community College.

Dr. Cole was named president of El Reno Junior College in 1976. Under his leadership, the college, now named Redlands Community College, added several new programs and the campus grew from one building to seven. Redlands’ nursing and allied health building is named in his honor.

“My father left an amazing legacy of service. He was a humble man, and even though he was very deserving of awards such as this, the success of his students, faculty and staff was his reward,” said his son, Dr. Rhys Cole, local veterinarian and a member of the Redlands Community College Board of Regents. “Throughout his career, he was committed to making post-secondary education accessible and achievable for all Oklahomans, and those efforts were truly inspiring.”

Over the span of his career, Dr. Cole was recognized numerous times for his outstanding service and commitment to education. He was inducted into both the Oklahoma Higher Education Hall of Fame and the Oklahoma Education Hall of Fame, and received the Distinguished Leadership Award from the Council of Opportunity in Education for service in federal TRIO programs. He was also honored by his peers with the Excellence in Education award from Seminole State College and was named a Distinguished Alumni by Eastern Oklahoma State College.

Dr. Cole grew up in southeastern Oklahoma, graduating from McAlester High School and earning an associate degree from Eastern Oklahoma State College. He received a bachelor’s degree from East Central University and conducted post-graduate studies at OU Health Sciences Center and the Oklahoma Biological Research Station before earning a doctorate in education from Oklahoma State University.