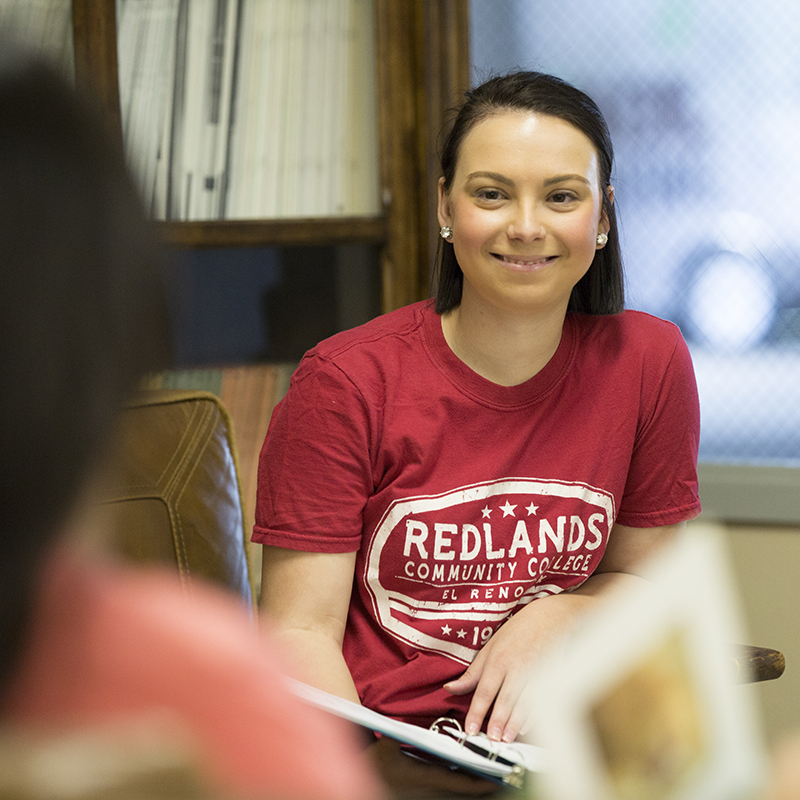 The Department of Safety, Behavioral Sciences, Business, Social Sciences and Performing Arts is ready to help you prepare for variety of exciting careers. Law enforcement, corrections, juvenile justice and homeland security are quickly expanding fields. Psychology is one of the Redlands’ most popular degrees. This degree field offers you opportunities for personal growth while giving you options in interesting and challenging careers. If you love working with children, we also have programs to help you prepare for a job as a child care professional or teacher.

Regardless of your career path, our department offers programs of study that will prepare you for a successful future. Our courses set you on a path to a two-year degree, or they transfer to a four-year university.

We work with universities around the state to ensure that you can transition smoothly from completing an associate degree at Redlands to earning a bachelor's degree at a four-year institution. Learn more about your degree options in these programs.

Todd Hobson, Department Head for Safety, Behavioral Sciences and Business
405.422.6253
Email
Office: S-107-C, Ray Porter Academic Complex
Todd Hobson earned a bachelor’s degree in Criminal Justice and a Master of Education degree from the University of Central Oklahoma. He spent several years working in corrections in both the private prison system and the Federal Bureau of Prisons. He previously served as the assistant director of training and development at Oklahoma State University-Oklahoma City and as a senior program specialist at the University of Oklahoma. He joined Redlands in 2004.

Erin Karl, M.A., Professor of History
405.422.6295
Email
Office: C-104, Ray Porter Academic Complex
Erin Karl received a Bachelor of Arts in History from the University of Missouri at Kansas City in 2005. She earned her Master of Arts in History-Museum Studies with honors from the University of Central Oklahoma in 2008. Following graduation, she became the director of a local historic preservation organization where she served for four years. She began teaching history part time 2009, and in 2012, she chose to focus completely on teaching and began an adjunct teaching career that spanned five college campuses in the Oklahoma City metro area. Karl began teaching at Redlands in 2015, joining the faculty full time in 2020.

Cherry Rain, Professor of Political Science, Academic Team Coach, and Coordinator of Student Clubs and Organizations
405.422.1493
Email
Office: N-104-A, Ray Porter Academic Complex
As a first-generation college student, Cherry Rain earned an Associate of Arts in pre-law at Rose State College and went on to earn her bachelor’s and master’s degree in Political Science at the University of Central Oklahoma. She has taught at several colleges in Oklahoma for many years, earning multiple awards in innovation and excellence. Cherry joined Redlands as adjunct faculty in  2005 and became part of Redlands full-time faculty in 2011. Rain has served as campaign strategist for an Oklahoma gubernatorial candidate and other local candidates. She is active in state politics and several nonprofit organizations. She is most passionate, however, about teaching beginning college students the principles and requirements of maintaining a democracy and inspiring many students in becoming active in the democratic process.

Brian Simpson, Professor of Business
405.422.1443
Email
Office: N-104-A, Ray Porter Academic Complex
Brian Simpson earned bachelor's degree in Accounting from the University of North Carolina at Charlotte, a master’s degree in Business Administration from North Park University and a master’s degree in theological studies from North Park Theological Seminary. He is currently pursuing a doctorate degree in Business Administration with an emphasis on international business through Liberty University's online program.

Redlands’ Child Development program prepares you for early childhood educator roles, family child care provider, child protective services worker, child care administrator and peer/program mentor. We also offer the Scholars for Excellence in Child Care Program, which provides mentoring and support services while you pursue a formal education in child development. With the help of scholarships and financial aid, you can be a “Scholar” and complete coursework to obtain a Child Development Associate Credential (CDA). Your next step is to earn a Certificate of Mastery in child development and eventually an associate degree in Child Development.